Ski Younger Now — the instructional program I started in the Vail Ski School — is aimed at people in their 50s and 60s (and older!) who have skied for decades. They still want to ski in control in steep terrain and moderate bumps, and they want to look good doing it. They want to ski with their kids and grandkids (and sometimes with younger spouses), and they’d like to ski all day long.

Ski Younger Now techniques largely take rotational stresses off the knees and lower back. You can’t completely eliminate rotational moves but there are ways to reduce the peak torques on major joints and muscle groups. We focus on simplifying the turn to continuous predictable arc and reducing the frequency of recoveries, a major source of muscle sprains in this group.

Most important, Ski Younger Now skiers learn to let the skis and terrain do the work, not the legs and lungs. They don’t necessarily quit at lunch.. They stay fresh and can go back out for two or three more hours.

The Ski Younger Now program is conducted as a three-day workshop throughout the season. The first day works on nine simple steps you might want to try on your own:

1.      Start with the “patience turn.” From traverse position, start a glide. Use a single subtle gesture to flatten the skis: Simply signal for the turn by gesturing with the downhill hand, as in signaling for a turn on a bicycle. Because modern skis are designed to seek the fall line when flattened, this gesture by itself begins the turn with no muscular input. As skis pass through fall line, roll onto the inside edges to shape and finish the turn, to a stop. Repeat in opposite direction.

2.      Link the turns, returning the turn-signal hand to neutral as soon as each turn has started.

3.      The hand gesture becomes the pole-plant gesture – it’s part of the existing skill set, and timing it to flatten the skis will pay off later with an early pole plant in steep terrain and bumps. 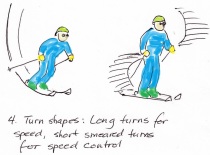 4.      Turn-shape exercises: There are two ways to use the ski: carving (full edge engagement) and “buttering,” using a flatter ski to skid or “smear” a tighter, slower turn. Use subtle edge pressure changes to move between the two styles as terrain and traffic dictate.

5.      Change pressure inside the boot: Experiment with the effects of pressure applied at big toe, metatarsal, arch, heel, and shin – and ankle roll for edging. Pressure on the ball of the foot makes the turn happen quickly and produces a shorter turn; pressure on the arch produces a longer, faster turn. Avoid pressure on the heel: it leads to back-seat skiing and even knee injury.

6.      Reduce vertical motion, especially up-unweighting effort. Lateral moves control edge angle, and thus turn shape, much more efficiently than vertical or rotational moves. Bouncing up and down only wears you out.

8.      Follow the shape of the terrain.  Find routes that use terrain shape to assist turning and do as much of the work as possible. For example, banked snow can help redirect skis; convex rolls aid when unweighting. Always maintain awareness of skier/boarder traffic.