Old age and treachery will overcome youth and strength.

My dad was a superb semi-pro tennis player. It’s one of the reasons I became a skier.

I had speed and strength and endurance. He had wicked accuracy.

Dad could put his shots in the far corner from wherever I happened to be. I was forced to respond to each shot with some desperate defensive lob, aiming only roughly at the center of his court in hopes of saving the volley. Run ragged, I collapsed after the second set.

Dad, of course, didn’t have to run. His game was in his fingers and wrist. His expertise was subtle, and required relatively small movements of his forearm to guide the racquet. My game was gross, requiring that I heave 160 pounds of meat around the court.

Here’s the lesson for low-impact skiing: Use subtle moves inside the boot, and lateral gestures of the hands, to adjust the angle of the ski and thus the radius of the turn. Take advantage of terrain shape to guide your trajectory. You could waste a lot of energy lifting and throwing your body around, but why bother? The mountain will beat you after the second set. 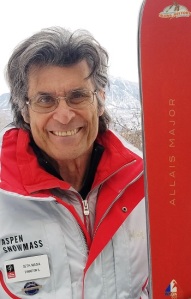 Ski Younger Now is a retraining program for older skiers, and skiers returning to the sport after recovering from an injury. Going into the 2020-21 season, I’m 72 years old. The reason older instructors can ski smoothly, all day long, is that we learned years ago how to ski with low-impact, low-torque, efficient techniques in all kinds of terrain.
For years my clientele has consisted mostly of skiers in their 60s and older, along with their kids and grandkids and spouses. Grandparents want to keep up with the younger folks and even teach them a thing or two. I help them do that.
These over-the-hill jocks (of both genders) are fully committed to the sport and eager to be retrained so they can do it for another ten or twenty years.
They now face a number of physical challenges: slowed reactions, weaker muscles, fragile joints. To the extent possible I want them to ski smoothly, using ski shape in place of muscle to start turns, guide skis and control speed. A critical issue is to reduce the torque on knees, hips and lower back. This means we’re going to reduce the steering component and replace it very largely with edging. Happily, shaped skis encourage this.
And we’re going to kill off up-unweighting, that ungraceful lifting of the entire body weight with each turn, in favor of energy-efficient lateral motions and, later, terrain unweighting.
The first key exercise is the patience turn. Skiers need to understand that it’s unnecessary (and counterproductive) to muscle the skis into a turn. All that’s needed with a shaped ski is to flatten it on the snow, and the tip will seek the fall line. And all it takes to flatten the ski is a very small upper body motion in the direction of the new turn. Good skiers do this by moving the hands toward the new pole plant. For nervous people, this move toward the valley may produce anxiety, so I ask for a simple turn signal: point the downhill hand in the direction you’re going to turn, as you would in signalling for a turn while riding a bike. This works like a charm, and this gesture will be the pole plant tomorrow. Point the hand and simply wait for the skis to begin turning. As you pass through the fall line, tip the skis a bit further onto the inside edges to complete the turn.
You can see where this is going. The idea of simple lateral motions to flatten and edge the ski takes both the steering torque and the unweighting body-lift out of the equation, and saves a huge amount of muscle energy. It feels so easy and so natural, and because we’re not jerking the skis about, the turn quickly becomes a smooth continuous arc. There’s no need to pause or recover before floating into the next turn, or the next. It’s easy to link these turns.
Next step is rhythmic turns in various tempi to learn about turn shape, with a funnel exercise to demonstrate full precise control. All of this can be done without breathing hard, even at 11,000 feet elevation.
The technique is valid for people of any age after rehabbing from an injury, or when resuming skiing after a long absence from the sport.
I’m excited to offer Ski Younger Now to a fresh audience of Aspen-area skiers. Snowmass SYN is a private-lesson format, with flexible dates. If you’d like to join me, email me, and we’ll coordinate schedules. Or phone the Snowmass private lesson desk at 970-923-8716.

Photo by Tom Lippert: Seth skiing powder at Squaw Valley.
Ski Younger Now launched in 2011 at Vail and moved to Snowmass in 2018.
All contents of this website Copyright 2011-2020 by Seth Masia. All rights reserved. No reproduction without prior permission.

Several years ago, Pete Wagner asked me to contribute some thoughts on the art and science of ski design. The resulting discussion lived for several years on the Wagner Custom website but got lost in a redesign, so I’m summarizing it here.

Today most of that trial-and-error is gone. You can choose a ski based on matching width and turn radius to the kind of snow you like.

For hard snow, get a ski with a narrow waist: 75mm or narrower.

For soft groomers or general western front-of-mountain skiing, get a moderate waist —  75 to 85mm.

For resort powder (with a firm surface underneath) get a mid-fat waist, 80 to 90mm.

For deep snow (with an unpredictable base beneath) get a fat waist, more than 85mm. If you’re big and heavy or carry a heavy pack, go even bigger: 95mm and up.

Shape means sidecut. A deeper sidecut with a shorter radius carves a shorter turn. In general, this helps best on groomers. It won’t help in bumps, where you want the tail to release to avoid hanging up at the end of the turn. My very versatile teaching ski has a shape close to 115-76-105, which gives a theoretical radius of about 12 meters and a bearing surface of 1350 cm2. Note that the bearing surface — the ski’s ability to “float” on soft snow — is similar to the classic straight slalom ski. So is the ski’s weight. But the agility — the ability to bend easily into a turn — is vastly improved due to a turn radius roughly 25% of the old long, straight ski. I choose a ski with a relatively soft-flexing tail so as to slip turn exit in moguls, and complete a clean turn in powder.

So what shape should you buy? Start with that “generic” 115-76-105mm shape at your length, then blow the waist up wider if you’re going to ski a lot of soft snow, and pull it in narrower if you’re going to ski a lot of hard snow. If you’re an expert who loves to carve, go for a shorter radius. If you want to be able to slide the tail a bit in bumps and tight woods (or if you have to skid a bit when you teach intermediates) opt for a bit narrower tail.

That’s the basics. Next time, I’ll consider the relationship between shape and flex pattern.